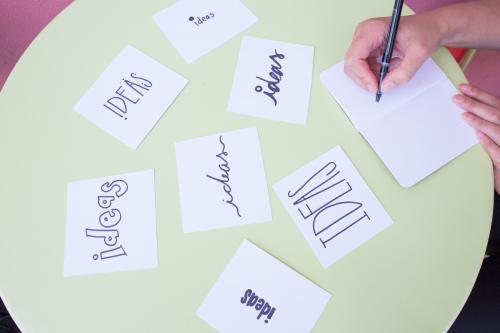 Creativity is fashionable again. For several years it’s been supplanted by the more business-sounding label of ‘innovation’. Although this was meant to encompass individual creativity, all too often it has just meant new stuff in technology - usually an App.

How do I know creativity has become a hot topic again? The same way you and I sense any trends - new books, training programmes, TV, and articles where you can’t escape the word have suddenly mushroomed. A few years ago I wrote about the ‘Righteous Brothers’ phenomenon, meaning every few years someone releases a cover of the duo’s great hits – like ‘Unchained Melody’ – and it soars up the charts again, simply because you have a whole new generation of buyers.

In the commercial world where I mainly work, Time Management is a prime example. Twenty years ago it almost disappeared as a key topic for seminars: now it’s revived as ‘Essentialism,’ essentially the same thing, but recast in sexier, digital-world terminology.

Which begs the question: what is appropriate coaching and training in Creativity for an era where dastardly machines and algorithms are beating humans hands-down in so many areas of enterprise? It’s a question that matters to me, as the core of my work has always been taking a creative approach to whatever challenges perplex me and my clients, whether it’s differentiating through a customer experience, launching a new drug more effectively, or designing a culture where innovation thrives.

Notice that none of these examples is about creating a new product, nor does it imply creativity is merely the preserve of ‘creatives’ or brilliant egg-heads in R&D.

Here are some clues for making creativity coaching relevant in the 21st century. Firstly, it has to be understood as a mindset or attitude that can be applied to anything and everything, not just to the creation of a new product. Services, solutions and fresh business models are increasingly even more important in our virtual world, where experiences trump things.

Next, it has to be everybody’s business. Indeed creativity may be the last battleground for homo sapiens to prove itself against the robots, as the majority of unthinking routine tasks are done more reliably - and increasingly more cheaply - by the machines. (A useful burst of paranoia can be gained here by visiting www.willrobotsreplacemyjob.com. That should inspire some creativity, if only out of fear!)

Also, modern creativity has to use technology as a tool, not a master. The balance between the connectivity and access to unprecedented data that technology can deliver and more solitary methods of thinking is vital to find. Ignoring new ways of exploring ideas and other minds is a mistake, but so is being plugged in 24/7. It’s a debate that’s currently raging in most households around the developed world: are we becoming a race of hypnotised screenagers, or should we head off to Tech Detox Camp?

The better approach is more of a ‘Both/And’ than an ‘Either/Or’. Creativity involves taking nothing at face level, thinking beyond the obvious, and seeing then world anew; sometimes merely looking at the deeper meaning of words is a good starting place. The Greek techne in technology has nothing to do with machines. Instead it translates as ‘art, craft, skill or ingenuity’.

That’s exactly the kind of creativity we need to explore if we are going to be creative Digital Citizens. Here’s my Creativity Charter, which I’m excited to be applying with renewed vigour to my Keynote Speaking, Coaching, and Consultancy work.

Everyone is inherently creative, although this is expressed to different degrees and with different cognitive styles.

Creativity is not just a God-given gift to people in the media, arts or scientific discovery: it’s an attitude and mindset that can be, and needs to be, applied to any and every area of human endeavour.

Creativity can be drawn out in nearly everyone – there are both timeless and 21st century skills, tools and methods that can be learned.

A creative life is a more fulfilled and joyful life, and often a series of small creative steps can be as satisfying as a giant leap for mankind.

Want to know more? Chat with me about Creativity talks, seminars and transformation methods.