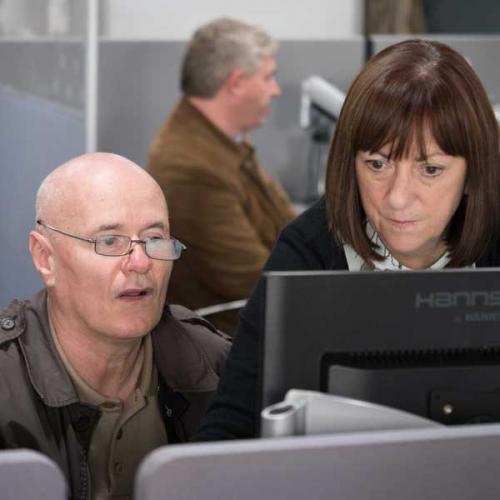 “We are all Digital Citizens now - disrupt or die!”

The final Orwellian message booms out to a room of earnest - sorry, digital - delegates at the technology conference. It’s been a super-slick presentation with all kinds of visual fireworks flickering on a screen eight metres wide; a folksy duet between two techno-mavens, with a little call and response banter thrown in to humanise proceedings. The speakers are fluid and fluent, working without notes and making much use of the relaxed body language and hand gestures they’ve clearly been coached in.

Despite my misgivings about the ultra-professionalism on display, it’s the best talk -or pitch, really - I’ve seen at this congress (I couldn’t witness my own Keynote, of course!). Frightening or compelling, depending on your point of view, with the impact of a great advertisement. Although here we’re not being sold a product so much a vision of an inevitable, “it’s already happening” future.

At the close, there is strangely no applause, just the sound of chairs hurriedly pushed away as delegates pack up their tablets and leave the room. I’ve come in late, and can’t quite fathom this response - after all, my interactive and decidedly analog speech the day before was hand-clapped enthusiastically.

I went up to the front of the room to congratulate the speakers, only to find a void on the stage. The platform had been largely in darkness, so I’d had trouble seeing the speakers from the back of a vast auditorium.

A few seconds later I realised my stupidity. We were in an overflow room, so the whole thing had been effectively a virtual presentation - the quality of the video images had suckered me into believing it was a live talk…

What was missing was that feeling of being in the room with the experts. That all important live chemistry, when the speaker can sense if the crowd’s energy is flagging and respond accordingly: change the pace, skip an example, invite interaction, make a mistake, or . . . anything really, simply to be present.

Being fully present is for me the essence of a great presentation: that invisible but essential exchange of endorphins, the nuances, laughter and applause. All the ingredients that don’t just impress the audience, but also move it. Think theatre rather than the movies.

Now I’m quite aware that this makes me sound dinosaurish. ‘Next he’ll be asking to bring back the overhead projector’ might be what you’re thinking. Join the digital age – it’s an unstoppable train and you can’t get off.

But the challenge we face is not just more technology – that’s a given and we’re already hurtling headlong into the Fourth Industrial Revolution - rather that the technology of our own minds has to keep pace with the digitalisation of every aspect of our lives. The day before I’d quoted an MIT physicist and cosmologist, Max Tegmark, who remarks sagely that humanity is engaged in a ‘Wisdom Race.’ On the one hand the mushrooming power and influence of new technologies such as AI and nano-technology. On the other our human ability to manage it all.

When I’m speaking, I’ve often asked large audiences of digital buffs if they know the original meaning of the word they hear scores of time every day: technology. Perhaps one in a hundred has an inkling, but I’m not just trying to be a smart-ass.

Techne is from the Greek, meaning: ‘Art, Craft, Skill or Ingenuity.’

Certainly this gives a different spin to the topic, one that transcends a world of digital assistants, global connectivity and on-line everything. Especially as logos is ‘the word’, knowledge or wisdom.

Tegmark is right: we need to concern ourselves with the art and wisdom as well as the science and architecture of technology. I would go a step further and say it’s the technology of our own minds or consciousness that’s the next and final frontier in the 21st century, but I’ll leave that for another piece. For now let’s just assume that the age of smart machines is only just beginning, with one wave of ‘disruption’ superseding another at almost the speed of light, and it’s this wave that we need to ride with our minds and emotions as well as our digital tools.

Just as I was getting to grips with the Internet of Things - between 30 to 200 billion devices connected by 2020, depending on which guesstimate you believe - the World Economic Forum tells us that the hot new disruption is going to be the Internet of Nano Things! And just when we’ve woken up to the fact that Uber, with almost no physical assets, is worth over 50 billion dollars, it’s becoming clear how insatiable is the desire for innovative companies to disrupt themselves - by 2020 they plan to make all their rides driverless!

It’s no wonder that the human brain, only a few hundred thousand years old in its current form, is struggling to comprehend, let alone keep up.

We are all Daniel Blake

Ken Loach’s recent moving film, I, Daniel Blake, charts the journey of a disabled, 58-year-old carpenter as he struggles with, and is ultimately defeated by, the Kafkaesque systems that face a benefits claimant. The most chilling phrase, especially to a man who has worked with his opposable thumbs all his life and is not the least bit computer-savvy, is uttered by a security guard at the Benefits office:

Blake is one of the losers in the Wisdom Race. While ‘digital by default’ is not going to slow down, the other side of the coin is that we need to work simultaneously on the notion of being ‘human by choice.’ To work as hard, and invest as much, on the development of our own consciousness as we are on enlisting machines to accomplish tasks for us. Make no mistake: technology has and will continue to bring us enormous benefits, including the elimination of countless mindless and even dangerous jobs, as well as huge gains in efficiency and productivity. It alone will not destroy us, but if we are passive about our own mental and emotional relationship to becoming  ‘digital citizens’ our sense of humanity and true connectedness as a species will suffer. And so will we.

That’s what I missed in the brilliantly put together virtual presentation I was almost seduced by: a sense of constructive doubt, of questioning and most of all, raw emotion. And, to be honest, I realised that my days as a live speaker might be numbered. Why not, when a machine could do it by numbers? A huge number of binary, digital pairs of 0s and 1s perhaps, but numbers all the same.

Like the famous line in Spartacus, most of us can now say,