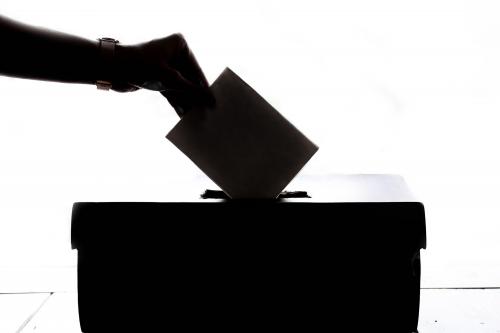 It’s time, isn’t it? Time to confront the system that we treat as a sacred sacrament, even though it results in a binary, yes/no, on/off and ultimately us/you outcome when it’s over-used.

I’m thinking not so much about Brexit – it’s overshadowed all world news in the UK- as the anachronistic mechanism that underpins it. AKA voting. Like true insanity, the way Parliament sees us getting out of this mess is by . . .no spoiler alert . . .more voting.

I write this in a temple to the power of debating and voting, The Oxford Union. Famous debates have happened here, most remarkably the soi disant King and Country one in 1934. Here, to the shock of patriots in the nation, young men (as they mostly were) voted they would not fight for King and country if there was another war. Passing through a door labelled Ayes or Noes signifies the vote: an overwhelming majority marched through the door that signified they wouldn’t fight.

Ironically, only six or seven years later many signed up for military service, and by the end of the War there were numerous dead and wounded among those who’d said they wouldn’t take part.

A sad story, or just an example of youthful folly tempered by real life experience? Whichever you choose, it’s the process of arguing fruitlessly and settling it all by a vote that’s in my sights. I’m sitting in a Victorian Gothic library, decorated by Pre-Raphaelite murals in its upper gallery; a long way from the street fighting of Brexit, though I hope the turbo charge of this small irony propels and accelerates my argument.

Here’s today’s story: a cynical remainer is hoping the current chaos means the evil exit day will never come, while the robust leaver thinks we are dragging our heels, and after all, haven’t the people spoken? She thinks he is selfish and racist, while he thinks she’s deluded and out of touch with the common folk.

That’s broadly the division we are witnessing in Parliament every day, with a few minority factions setting up side stalls and distracting amusement rides on the Brexit funfair site.

The tool that’s being used to resolve the problem - three times in the week I’m writing - is the simple, can’t say fairer than that, process of. . .Voting!

Then voting on the votes, and deciding whether we need another vote to see if we all agree what the last one was all about.

We need a new approach. Einstein’s oft quoted definition of insanity goes like this: ‘. . . doing the same thing over and over and expecting different results.’

In history texts of the near future (the syllabus may well be delivered by text) we will read about the Brexit negotiations/ritual dance/shambles * (* delete as appropriate) as a prime example of collective insanity. Referendums are intrinsically toxic, setting up fertile conditions for division over, well, almost everything. Remember Quebec’s divisive separatist vote? It set back the local economy for decades: the toxicity it brought to the debate still affects the politics of the province today.

In the same year as Brexit, Columbians voted in a referendum against a peace plan, while the Thai people endorsed a system that is not very pro-democratic.

So let’s carry on voting on the vote that got us here – surely one day soon we’ll get the longed-for ideal vote. It’s insanity.

Into the arena steps digital, maybe not the cause of divisive thinking, but certainly the carrier and amplifier of us/them, binary thinking. Instantaneous media – I prefer that label to ‘social media’ because it often isn’t very social – accelerates and exaggerates tribal differences in thinking rather than understanding. Digital Flintstones have gone viral.

OK, here comes the familiar challenge: ‘What’s a better and fairer system than voting? You make some good points in analysing the problem, but what’s your alternative?’

It’s a time-honoured response to criticism of the core of democracy – ‘one man, one vote,’ and thankfully now one woman also! - but can be disrobed as simply resistance to new ways of thinking and governing. Once we have voted for a government (and that’s quite enough voting for a few years), the social contract is that we have given them a license or limited franchise to do what they think best for the nation. And that means not ‘out-sourcing’ (a tenet of deep faith among those in the democratic capitalism religion) the decision-making to a largely uninformed public. Of which I’m one.

When a new paradigm - the set of collective, assumed beliefs about how the world works – emerges, the starting point for transformation is that the data doesn’t fit the existing model or mindset. This dissonance is a harbinger of change and the next, as yet invisible, disruptive jump in thinking. That’s where we are now: what we have assumed to be the best way of governing is failing over and over.

This is the Little Data that we can see without being an expert: the system is broken. Just acknowledging this, and accepting we need to put as much energy into finding new ways of making national decisions, as into the things we are deciding, is enough of an answer to the challenge to offer alternatives. To put it simply, we are over-focussed on the details of the task at hand-Brexit today, whatever tomorrow - rather than putting the nation’s best minds to work on rethinking the underlying, taken for granted, process.

We are furiously digging a hole, without stopping to ask the question, ‘Are we digging the hole in the right place, or with the right tools?’

The roots of divisive, oppositional thinking are in a superficial understanding of the ancient Hellenic tools of debate. Thesis (say ‘Leave, it’ll be good and bracing for us!’) meets Antithesis (eg, ‘Remain, or it’ll be an economic disaster’), and both arguments are frozen in a rigid death embrace.

The original idea was that Thesis vs Antithesis was merely a stepping stone to a third position of Synthesis: connecting and bringing together the best elements into a new, creative solution. Well, we don’t see a lot of that in Parliaments, whose structures pinnacle in voting; they are designed for oppositional thinking and decision-making.

If you have any belief in progress, the next big paradigm for enlightened governments will be to work from a more connected, synthetic level of the mind, one that is centred on both consensus and efficient policy implementation. It will be resisted by those who think God gave us the vote, but whatever the new mechanisms, their arrival is probably inevitable. Homo sapiens is a learning species, and although often clunky and slow, our natural desire for growth and survival means we eventually discard practices that don’t work. . . Like voting.

To ‘protest’ means to be pro-for-something, not just mindlessly against. Surely we need to be for a system that doesn’t pit us in an endless loop against each other. One that doesn’t waste so much time, energy, attention and money.

As with any innovation, we have to trial and test new methods, some of which will undoubtedly fail. But unless we do, the future is fairly clear: stasis triggers collapse and decline.

Necessity is often the mother of invention, but so is desperation! My fantasy idea for creating a better quality of debate is to lock the decision-makers in a room, telling them they cannot visit the bathroom until they have come to a shared view. A form of Erhardt Seminar Training for politicians, with the weak-bladdered at a clear disadvantage.

Crazy? Of course. Though hardly more so than the current insanity of vote, vote and vote some more.