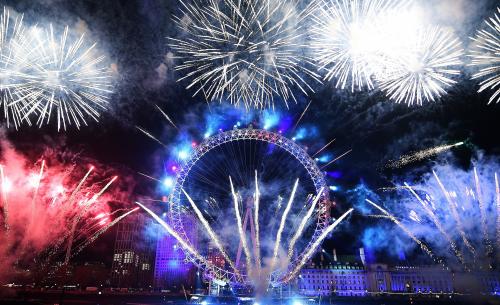 How is it possible?

I don’t know about you, but 2019 was a turbulent one for me with a family bereavement and changes in the way I run my business.Taking the wider view, the obvious hope or prayer for the world at the end of the year is for more harmony, less division and conlict; in politics, society and international relations.

Newspaper headlines are binary: us/them, Brexit/remain, Trump/anyone but Trump, right/wrong. An American President is impeached but may become even more popular with the average voter as a result, while a British Prime Minister is both admired and detested. It was always so, you might say, but the same digital technology that brings us the blessing of connectedness also supercharges our ability to fool people or stir them to anger. Instantaneously, at the stroke of a key.

You know the rest: trade wars rumble on, climate change may have triggered out of control fires in the USA and Australia, while two stubborn wars in Syria and Yemen refuse to end.

I can advocate three ways of finding at least a little peace in these troubled times. And I don’t mean denial, rather a necessary antidote to the free-floating anxiety triggered by the dire predictions many journalists inflict on us. Being concerned and feeling helpless won’t help anyone, whereas some perspective that prevents us drowning in an ocean of despair enables us see clearly what we can do to help, in whatever small ways we can find. Here goes…

My first suggestion is to give yourself a news holiday – very hard to do when you log in and dire news flashes seduce you. But it’s an addiction, unconsciously laced with schadenfreude : at least it’s not happening where I am! We know the headlines are overdramatised and designed to distract and upset us. Fear, anger and outrage are still the main emotions the press trades in.

OK, if there are floods and fires in your neck of the woods it’s good to know enough to take necessary measures, but no need to wallow in it. Give yourself a news holiday and you will feel much better, and make more positive choices about what to do with your time. You won’t be out of touch, simply more in touch with your creative self. The digital era has been labelled ‘the Distraction Economy’ for good reason, but it can be resisted and prevented from chopping up one of the greatest gifts we have, human attention, into ever smaller binary slices. Read a book rather than a magazine, listen to Beethoven’s Emperor Suites all the way through rather than sampling a soundbite: you are on the way to restoring at least a little peace or sense of wholeness in your own life.

In my second suggestion is the evidence base for doing this: take the longer view. One way to achieve this is by reading Swedish Professor Hans Rosling’s wonderful book, Factfulness. It’s become almost a Bible for me to return to when I’ve been blitzed into a depressed state by the breaking news.

The book opens with a questionnaire about the actual state of the world, based on the most reliable hard statistics we have to hand. He asks questions like:

“In the last 20 years has the percentage of the world’s population living in extreme poverty : (a) Doubled (b) Stayed about the same, or (c) Almost halved?”

The answer, surprisingly for many, is (c). The same positive trend is revealed in a battery of questions about health, longevity, death and injuries through wars and conflicts, womens’ rights and so on.

Most revealingly, Rosling tried his questionnaire with many of the world’s thought leaders, politicians, economists and scientists at locations like Davos and the UN, only to find that they scored worse than a chimpanzee, randomly picking one of three bananas to signify (a), (b) or (c). Even what were supposedly the world’s best minds had been seduced by hysterical headlines into believing the world was getting inevitably and rapidly worse, when all the factual indicators of quality of life demonstrate it moving in exactly the opposite direction over the last 50 years!

I can sense a big objection coming: ‘But what about the situation in…?’ “What about global warming?’ and so on.

Well, you’d be both right and wrong. Right that there is still a lot wrong, but incorrect because life for many millions has continued to improve, underneath the radar of negative headlines.

“It doesn’t have to be good or bad,’ says Rosling, ‘it can be better and still bad.’

Let him challenge your mindset rather than me – do read Factfulness, and if you find at least a little sense in his data it will have been worthwhile…

The third method I recommend for finding some peace of mind in your own life is to practice daily meditation.There are many forms around, but I can speak of my wholly positive experience of practising a simple technique for many years, Transcendental Meditation (or TM for short.)

It’s a simple, effortless technique that you enjoy for 15-20 minutes twice a day, sitting comfortably with eyes closed in a chair-which for me might be on a train, in a taxi or airplane. There’s no belief system or lifestyle change involved, and I have found no more effective way of wiping out stress, recharging you mentally and physically and establishing emotional resilience than my daily periods of TM. It helps me to think clearly under pressure in front of a business audience, not to freak out when things go wrong and to stay relaxed and creative in challenging situations. I regard it as a sanctuary of stillness in a turbulent world, and not just during meditation: the effects spill over into daily life.

I’ve heard many moving testaments to the power of TM, but the best I’ve read this year comes from

singer and writer Nick Cave talking about his 6 years of experience:

“…from the first time I meditated, I stopped fearing the end of the world. I find that it also helps with low-level anger, uncommunicativeness, resentments, impatience, passive-aggression, depression, self-obsession, hatred of the world, blaming others, wanting to murder and maim people and a whole lot of other maladies I had been dragging around and allowing to define me.

Meditation modulated my calamitous internal thinking, and the freaked out tyrant residing in my head that represented the worst version of myself was largely deposed.”

A very eloquent way of saying that, even though he’s famous for dark thinking and has suffered the greatest tragedy a parent can go through, the death of a child, his TM has allowed him to find some inner peace.

The charitable body I’m a Trustee of, the David Lynch Foundation, has taught this technique of meditation to millions in the world’s most stressed and at-risk populations, as well as to many in business. So in 2020 I will be combining my work speaking on Innovation, Disruption and Mindset with an increased focus on teaching the corporate world the best-researched and most efficacious method of reducing stress, enhancing creativity and mental wellness. I trained as a TM teacher many years ago – it takes an intense year or more to qualify as an instructor. Over the years I’ve taught many professionals, business leaders and ordinary people to meditate, finding that the best way to achieve a measure of peace yourself is to pass on the gift to others. Check out the Lynch website- davidlynchfoundation.org.uk -or contact me directly.

Here’s wishing you much happiness and success, not just in this New Year, but in the decade that follows!