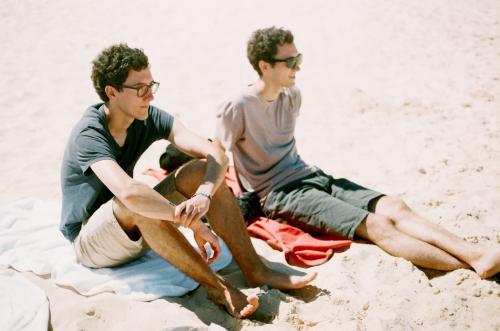 A setback, loss or tragedy skidding across the straight ahead tracks of life can make us think about some obvious truths, invisible in front of our faces. The real tragedy is this realisation may come too late to act.

Our sibling relationships are often the longest lasting in life. If, like me, you are the eldest, it’s also consciously the longest connection. Whether the relationship is close, cool or estranged, that connection pulls on us like a tide, affecting our sense of who we are.

The recent passing of my younger brother, Julian, stirred these thoughts in me. When clichés are true, it’s because they are: Joni Mitchell’s words ‘You don’t know what you’ve got till it’s gone’ keep playing in my head.

In reality what we’d got wasn’t very close and intimate. If you’d charted our contacts as a map in the adult years, ‘Large amounts of ocean omitted here’ would have been an accurate legend. Like rudderless vessels, we had drifted apart over the years.

But in recent times he’d contracted a serious illness, and our exchanges had become much easier, more accepting and forgiving of each other’s foibles. There’s no-one more than a sibling who can wind you up or send you, helpless, into a time-honoured chemical loop of familiar reactions. Luckily, we were able to revisit old experiences, memories of parents or friends without much edge or rancour, often with laughter at a wicked barb that skewered shared bugbears and enemies.

From outside the familiar ritual dance of your relations with a brother or sister, a caring partner can see how to handle the inevitable tensions, most of which are really maya or illusion. I was coached to see my ailing brother not just through the lens of his sickness, but to engage with the everyday part of him that was alive, knowledgeable and opinionated, on politics, sports and life. Further, to see him as he was now, not as in the old photograph that framed him in my mind’s eye.

Cut to Julian’s last day in hospital, struggling for breath. The words he said to me that morning – ‘I’m dying today’ – went right through me, rendering me helpless. Others may sympathise, even empathise with your pain, but they can’t feel it. And he was in pain.

Would getting to know him afresh in those last years have assuaged the inevitable regret, tinged with guilt, that descends unbidden and at surprising moments? I’m not sure, but it came over me most strongly in the moments before I stood up to speak at his funeral. I could tell tales – and did – about his early acts of creative mischief, revealing an unconventional spirit and fierce intelligence.

But the university and adult years? Here be huge oceans of ignorance, misunderstanding and distance. Only some of the obvious landmarks stand out, like church steeples in a drowned village. His unhappiness at the LSE, first marriage, birth of a daughter and then a son.

What a lovely surprise then to meet so many strangers at his funeral, all of them full of stories of how he’d supported, mentored or helped them in their lives and careers. He’d even taken on the authorities and changed the way death statistics are reported in the UK – he worked for the NHS.

Here comes the thought that’s always voiced at memorial occasions: Why does it take a tragedy -Julian didn’t have an easy passing - for people to express their true emotions? Couldn’t there be other ways of seeing the pieces of the jigsaw, the many unique perceptions of those who knew someone, which pieced together make up a life? The immediate reflex is to make resolutions that will be swiftly forgotten - ‘We must see each other more often!’ is the well-intentioned sentiment we exchange. But we probably won’t…

It helps if the intention is focussed and practical enough, to find a channel through which to drive the more inclusive energy a death can trigger. I resolve to be closer to Julian’s children, and know my sister better, which would seem to be a fit testament to his memory.

Perspective comes slowly in the days that follow his death, but if I face it full-on rather than through peripheral vision, the truth is that I wasn’t the best big brother I could have been. When I call Julian my ’little’ brother, it sounds patronising (he was always 3 years younger). Also inaccurate – by his teens he was well over six feet tall and towered over me.

I was apparently the one who did well; not so much a function of my abilities as being first in the birth order. Inwardly I may have been as uncertain about my place in the world as he was. But as recipient of our parents’ first wave of love I may have inherited a certain confidence – probably perceived by him as arrogance - that made life’s transitions more manageable.

Did I ever try to understand how this affected him? Not a lot.

Did I mix with his friends and share his interests and passions?

Did I reach out to find how his life was in the later years?

Blood is not always thicker than water. Our world today is one in which we make our own families, creating a tribe of those we share a spark with.

A death in the close family brings back memories of a life you didn’t choose, but shared, with another soul. A family is only understandable from the inside – it’s a unique experience to grow up together within it.

Now if I were writing a self-help book I’d be encouraging you to make a phone call or send a message to distant family members immediately!

Hold that thought. Maybe you just don’t want to, or have worked out a calculated distance that doesn’t stir up annoying dissonance – the gap between how you would like them to be, and how they are. A gap that may be desired mutually.

I leave this entirely to you. It’s the question and what it provokes that matters: how well do I really know my brother or sister?

It was a gorgeous, sunny day at Julian’s funeral – late February, but as warm as May. I closed my tribute with a blessing I now realise would have had more resonance if I’d known him better.

‘God speed’, I said, suspecting he was an atheist, but we never had the conversation.

‘…I hope your soul…’ Did he believe we have soul, or thought this was just mumbo jumbo?

‘..finds the peace that sometimes eluded you in this life…’

Did it? Again, did we have the conversation?

One of the few things we may regret later in life is that we didn’t try hard enough to know another, outside the four walls of our limited idea of selfhood.