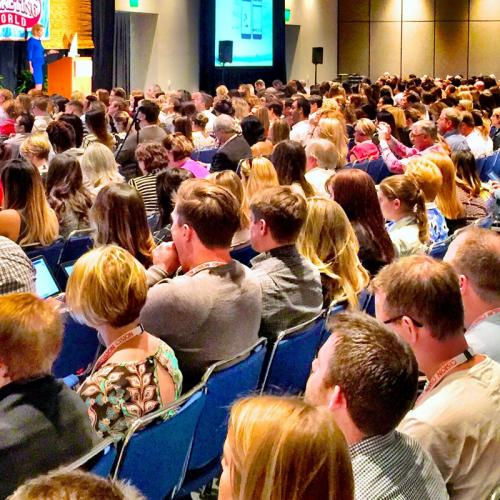 In the motivational or inspirational field there are five types of speaker you can hire for your conference.

First, the Celeb. “Wow-Richard Branson came to our conference, and he actually looked at me!”
“What did he say?”
“Er…dunno. But it was really him.” You’re just happy to be brushed by greatness…

Next is the Heroic Storyteller. The one-legged woman who climbed Everest without oxygen while suffering from life-threatening cancer. You can do it too!

Then there’s the Start-up Star. The teenager who borrowed $50 and an internet terminal from their parents, only to create a multi-billion dollar video file-sharing platform from their bedroom.
Could you do it too? Probably not, though you will doubtless wonder why your own teenagers have spent all those hours perfecting their skills on Grand Theft Auto 5 instead of bringing home the virtual bacon.

You could also hire the Turnaround Champ.Someone who inherited a fading brand, and by the sheer force of their will turned it into a runaway success. Mostly it was about the people, not them personally. Although on second thoughts it was mostly about them . . .

Finally there’s the rest of us, the Professional Speakers who have lived ordinary lives - a bit like those of our audiences’. We are the ones who work harder at crafting a relevant message-and delivering it as a memorable performance in its own right. Based on the ideas in my book, RockYour Presentation, here’s some of the extra preparation we put in to deliver a worthwhile experience for our clients. In other words, to make the event really rock...

We’ve been brainwashed to think the client is always right, and while at an emotional level this may be true, it doesn’t necessarily apply to the initial conference brief you are likely to get. There’s a spectrum from the ultra-vague, “We want something . . . er. . . motivational!” to the all-and-everything brief:“We would like you to cover leadership, talent development,competitive advantage, innovation, and the customer experience in a digital environment.”

One end of the scale I call Las Vagueus- it’s a gamble as to whether you could ever deliver satisfactorily. The other is Life,the Universe and Everything, because you are expected to change the world in 40 minutes. One is clearly too abstract, the other unrealistic. And if you think I’m exaggerating with the examples above, they are very close to ones I’ve received recently!

The professional will naturally work with the client to clarify this. And the best approach is to ask basic, Colombo-like queries, after the famed TV detective who quizzes people with the apparently dumb, fundamentalquestions which everyone else has forgotten to ask. Ones like:

‘Why are you holding this event?’
‘Would anyone notice if it was cancelled?’
‘What worked well or badly at last year’s version?’
‘Who cares about the follow-up?’
...and so on.

Clients tell me the most powerful questions I ask are:

‘As a result of this presentation, what do you want your delegates to be thinking, saying, feeling and acting like that’s different from when they sat down?’

The second question is often more revealing than the first, with the most typical answers being that they don’t want their audience to feel bored, talked down to, that it was completely irrelevant, or just a wall of Powerpoint.

On the positive outcomes the most common response is they want a session that energises, informs and inspires the listeners, giving them at least one or two practical ideas they can apply at the conference and back in the field. Above all, that it makes them think and engages them emotionally. Starting with the end in mind and working backwards seems to unlock the event organisers’ ability to think openly and creatively.

Another key question should be about the tone of the event. Is it, for example, celebratory – it’s been a great year – or heads down and serious, purely educational or upbeat, formal or informal, and so on. Normally I’ll be told it’s an opportunity primarily for people to recharge their batteries and network, to which my Colombo query is, ‘How has this been built into the timetable?’

A good speaker is curious about how their input segues from and links into the flow of the whole event, so I frequently find myself giving ideas on sequences and timings of other parts of the conference. It’s usually -though not always-appreciated!

I sense I’m getting a little ‘self-helpy’ here. My point is that professionals will have their own questions, and show honesty in challenging or improving the brief, which includes the possibility of turning the job down if they genuinely believe they can’t achieve the desired outcome.

Getting Under The Audience’s Skin

Let’s get the received wisdom out of the way:yes, you do have to know your audience.

But it’s a bit more complex than that. In Rock YourPresentation I argue that sometimes you need to ignore them, meaning that if you pander to what they already know and the style they are used to, then you are not stretching mindsets and delivering anything new.

The trick is to be on the cusp of their knowledge, grounding what you say in some of their reality, while at the same time giving them fresh angles, a new way of looking at the familiar. And there’s no better way of preparing than actually speaking with some of your audience in the weeks before your talk. Typically for a large event I might have six half-hour phone calls with a ‘diagonal slice’ of the group, a spread of seniority, job roles and geographies. This way you elicit inside stories, examples, gripes, and challenges, and then something more: you have allies in the room who you can bounce off and who usually now want you to succeed, reducing the risk of your message being rejected as a foreign body by the corporate immune system.

Best of all is when you can bring them into the speech, either by naming their input or getting them to say a few words about an example you’ve discussed: an amazing story of customer-centricity or a choice anecdote about the company’s attitude to work/life balance, for example. This is great because it creates exactly the dynamic good speakers are looking for – to make their talk a conversation rather than a monologue.

My favourite feedback is when people say, ‘Wow - you’ve really understood our business/culture/aims/problems.’

There’s a delicate line here: in giving business presentations you have to research a lot more than you can possibly include, so your knowledge isn’t just skin deep. But at the same time you mustn’t pretend that you actually know and feel viscerally your listeners’ everyday reality. Avoid false empathy!

My request is for an information dump-if it might be relevant to my input, I ask for it anyway, and I’m not afraid to ask for someone to explain in idiot terms - I’m the idiot! - exactly what that new report on Creating A Digital Culture means in plain English.

At the same time I do like to discover one or two angles about the company’s recent or ancient history, competitor information, or a topical left field report on the industry which many of the delegates aren’t familiar with themselves. Above all, I attempt to think beyond the organisation I’m speaking to and look more widely at their business segment, now and in the future.

Of course there’s a fine line here between being highly informed and coming over as smart-ass, but handled sensitively it’s OK to impress with what you know. My aim is to look for an angle and example that surprises, stimulates, inspires, or even creates a slight frisson of anxiety.

It’s not enough to ‘know your audience’ – you also need to have some sense of the environment and culture they work within.

You’ll have noticed that we haven’t even got to creating the talk, never mind delivering it. This preparation is the greater part of the iceberg, which supports the visible part of the talk, presentation, lecture, or pitch. Without it you can deliver something good, but not usually great. What the audience will eventually feel is the impact of the attention a professional has given to delivering a unique, tailored and relevant speech. It’s profound customer- (or audience-) care in a practical sense.

The result will be that none of the most common presentations ailments - Death By Powerpoint, extreme restlessness, and losing-the-will-to-live syndrome- will afflict your listeners. Speaking is a craft, a successful talk a performance. A professional will do whatever it takes to bring these principles-and your audience-alive.